About the research project

Astrolabes are without doubt the most sophisticated instruments ever devised before the invention of the computer. The theory for their construction was first discussed in ancient Greece, probably as early as the 2nd century BCE. The instrument was constantly developed and adapted to the changing needs of the owners. This adaptability, combined with its sheer aesthetic beauty, its relatively easy use, combined with the multitude of functions that it could perform, meant that it remained in universal use until at least the 17th century.

An astrolabe enables the user to carry out a multitude of tasks - from determining the time of day or night and the prediction of sunrise and sunset through the determination of prayer time or local latitude to surveying and astrological predictions - the possibilities are virtually endless. It is not surprising, therefore, that this instrument has acquired a meaning that goes far beyond its practical use. Astrolabes can symbolize the owner's wealth and his profound understanding of the universe - as well as an often hazy idea of divination and magic. As such, astrolabes can be found in Western European, Islamic and Jewish cultures and in media from manuscript-illuminations to Harry Potter movies, where their presence in Professor Dumbledore's study encapsulate the arcane knowledge of the owner. 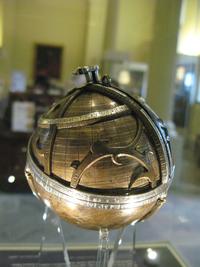 This instrument embodies perfectly the peaceful exchange of knowledge and ideas between Christian, Jewish and Muslim scholars in the Middle Ages. Ancient Greek astronomical and mathematical texts were translated, discussed and commented upon. Instruments based on these texts were made and ideas taken across Europe and the Middle East by traveling scholars. The use of Arabic numerals and many words in modern European languages, which still reveal their Arabic origin (such as algebra, algorithm etc.) originated at this time. And due to its versatility the astrolabe appears consistently in these discussions.

In recent years, texts and instruments both from the Christian West and the Islamic East have been researched and the varying role that the astrolabe played in these societies over the centuries have been discussed in detail. Surprisingly, however, there has so far been no study of Hebrew texts dealing with the astrolabe, nor has there been a comprehensive examination of the surviving instruments. Thus the important role that Jewish scholars played in the transfer of knowledge between the classical, medieval and early modern ages, between the Islamic world and Christian Europe has not received the attention it deserves. Consequently, it remains virtually unknown that Jewish scholars developed a completely new terminology in their attempts to understand the Arabic treatises and that the same scholars undertook observations with the astrolabe - a phenomenon unparalleled in Christian Europe until the mid-13th century. More importantly, the role that the astrolabe played within Jewish communities has hardly been explored.

The aim of the research project was to explore for the first time the role that astrolabes played in Jewish communities by examining in detail the earliest surviving Hebrew treatises on the astrolabe by authors such as Abraham bar Hiyya (1070-1136) and Abraham ibn Ezra (1092/93-1167) as well as all the surviving instruments, both those made of brass and those made of paper.

The project team discovered several astrolabes and several Hebrew texts on the astrolabe which had not been known hitherto. As the first scholars to study the status of the astrolabe in medieval Jewish society we have revealed many details of its construction, its use, and its depiction in Jewish communities throughout Europe and the Islamic world. Jewish astrolabes form a small, but representative part, of astrolabes as a whole, and the detailed methodology that has been applied to describe these astrolabes can be used for non-Jewish astrolabes in the medieval Christian and Islamic worlds.

The project has produced a number of outputs including:

More publications can be found here.