For more information about the group at the Ashmolean Museum, click here.

For more information about the group at the Pitt Rivers Museum, click here.

Below are the talks by three of the members of the group which were given at a workshop about social prescribing in July 2019 in Oxford. In it, they describe in their own words the important role that the Museums have played in their lives.

What have Gardens, Libraries and Museums got to do with your health and wellbeing?

[Gardens, Libraries and Museums] have all played a very important part in mine. Having experienced nearly all of the list of most stressful things that can happen in life, including 2 life saving operations, family estrangement, the death of my husband and close friends as well as PTSD after an accident.

I have been through short periods of counselling and I admit talking things through helped, as well as the support of my children and friends.  However, I realised that gardens and libraries were very important in my early life and museums have stimulated my mind in my old age.

Today, I'm going to focus on how gardens and museums have helped my health and wellbeing. 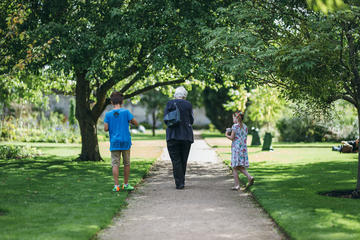 I started school in 1939 aged 5 - a child during the Dig for Victory years. My father and grandfather were keen gardeners - we always had home grown vegetables. When my father was called up, my mother and grandfather continued growing as much as possible and I 'helped'. As I grew older I realised I was enjoying it, and had a love of gardening.

During my teacher training course, to become a primary school teacher, I chose to specialise in rural science, one of the best decisions of my life.

My husband was a keen gardener as well, and for years organised the flower and produce show, held at the University Press. Unfortunately, he developed Parkinson's Disease and had strokes which meant an end to his normal gardening life. But knowing how important is was for him and me I redesigned the garden with raised beds so could he could continue doing what he loved.

I found then, and still do now that the stresses of life at whatever stage, vanish when planning, pottering, planting or just sitting and watching the insect life around the garden.

Growing up in Oxford with the Pitt Rivers, the Ashmolean, and Natural History Museum easily accessible was a wonderful way to look and learn - not only about their contents but seeing the imposing buildings impressed me as well.

I've enjoyed visiting museums in different places over the years, some even found by accident when taking a wrong turn.

10 years ago, my cousin Chris introduced me to Memory Lane, a group at the Town Hall, led my Helen Fountain for pensioners, to reminisce about our own experiences and those of our family. Helen Fountain was excellent. She encouraged and brought out the best in us- I even found myself contributing, which was very unusual - I was fine with children, but always uneasy in front of adults.

Helen then began the Meet Me at the Museum sessions at the Pitt Rivers, Natural History and the Ashmolean where we had talks on various subjects and were allowed to handle some of the objects.

When she had to leave, Sarah took over the Town Hall projects and Beth, here, did Meet Me at the Museum. In my old age I was experiencing something new. Going behind the scenes, watching precious objects being restored, handling ancient objects, being told the stories behind the exhibits. 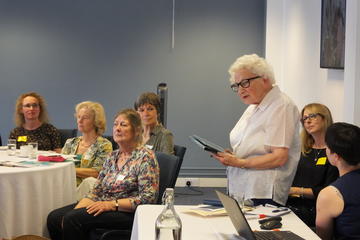 Jean speaking at a workshop on social prescribing, 10 July 2019

At the beginning of last year, some of us took part in the Messy Realities project at the Pitt Rivers, comparing the health aids we use today against those from the past. It involved not only pensioners, but students, researchers, academics and others. At the end of the first session we were all asked to say one word that described how we felt. That's where at first my mind went blank and I couldn't think of anything, but something came out, I managed.

My confidence must have grown during these sessions because during the last one, which was a general discussion, I suddenly found myself speaking for a couple of minutes without losing words or stumbling, or my mind going blank, most unusual for me. I felt exhilarated after. I had done something in my 80's that I'd been scared to do all my life.

When Beth asked for people to talk today [at the workshop on social prescribing in July 2019] I actually volunteered. If I've got through it without panicking too much I've reached another goal.

Both gardens and museums help to keep me stimulated and sane and I want to continue nurturing both to the end of my life.

I was a carer for my parents over 12 years. They had … Parkinson’s, dementia and Alzheimer’s, between them. It was a very stressful and tough calling, but I had such lovely parents who always helped and loved me over the years. I will never forget them and how they always helped other people as well.

After selling the family home and dividing up the money, downsizing, dealing with a 16 moth probate, and looking for accommodation, I developed stress and an auto immune disease, Myasthenia Gravis.

[There are] only 10,000 of us in the country – symptoms included muscle weakness, dropping eyelids, swallowing and breathing problems, great fatigue, like ME symptoms. However, the disease is manageable, although frustrating in many ways, and you need to pace yourself – although for myself I am always too eager to be out doing things and experiencing new ventures – not always wise!

The NHS were wonderful and helped me through a very dark time – without the fantastic NHS where would we be! When I was better I returned to all the fabulous clubs run for the over 50s – reminiscences at Memory Lane, Meet Me at the Museum, where we have the lovely Beth, Helen and Sarah and hosts of volunteers to keep the wheels turning. At these monthly get-togethers I also met some very kind and charming friends, who have all proved to be excellent.

I also know that all the friends and organisers have helped me through bad episodes of illness, moving house – too many times, and other worrying situations. All of these get-togethers are incredibly valuable and interesting, providing comfort, friendship and fun.

5 years ago I was asked to work with a 93 year-old lady suffering with severe anxiety and depression who had become socially isolated. To help her with this I was advised to try to get her out of her home as much as possible. We were invited to the pilot Meet Me at the Museum session at Pitt Rivers where for a short time she was able to forget her anxiety.

I continued to take her to this group, Age of Nature and Memory Lane to try to help with her anxiety. She would often appear disinterested, with her head in her hands asking why we were there. Then one day Helen asked her about her time in the Land Army. It was like watching a tree emerge from Winter as she started talking about what she had done in the Land Army. Slowly this lady began to bloom like a tree waking from the winter through blossoming in spring to fruiting in summer, the transformation was amazing, she grew taller and her body opened up from its curled state. You could hear a pin drop in the room, everyone was totally enthralled in her experience as it was living history. Afterwards most people went to speak to her about it and I looked at her face, realizing how good this was for her. 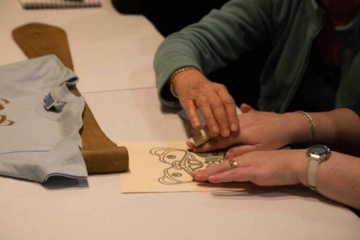 In the handling of object sessions I witnessed this happening to her on several occasions, she would be curled up head in hands and then an object would catch her eye and the same thing would happen like a tree waking up she would become totally interested in the object and finding out as much as she could about it. Once you could get her talking about things that she was really interested in she just came alive.

This to me is what Social Prescribing is all about, the difference it can make to people’s lives, especially the people who are isolated through illness or living arrangements.

This lady is no longer with us but I still go to the groups for the interest they have arisen in me and for the very good friends I have made.