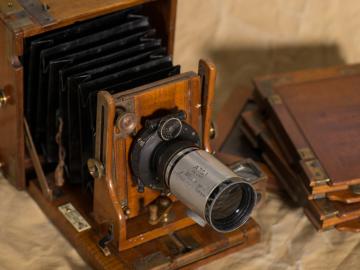 TE Lawrence (1888-1935), better known as ‘Lawrence of Arabia’, specially commissioned this camera for use as an archaeologist in the Middle East. Lawrence’s sexuality has been disputed since 1955, when biographer Richard Aldington suggested that he was homosexual, an assertion denied by Lawrence’s friends and family. This debate raises important questions about the purpose of LGBTQ+ history – can individuals be categorised as LGBTQ+ when they did not openly identify as such and past understandings of sexuality were very different? TE Lawrence’s case is further complicated by his assertion that in 1916 he was sexually assaulted by Turkish soldiers. The taboo surrounding same-sex rape and ideas about ‘emasculation’ could be one reason behind suspicions that Lawrence was gay. Some readers have interpreted his description of the event as homo-erotic, but this and subsequent behaviours could alternatively be symptomatic of post-traumatic stress disorder. It has also been argued that Lawrence was asexual as he declared in multiple letters that he had not had any sexual relationships; however, celibacy was not unusual amongst upper-class intellectuals at this time. 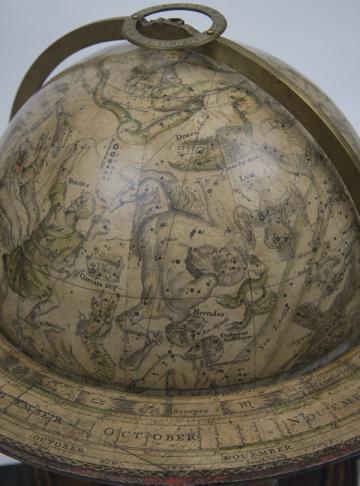 There are many mythical heroes amongst the constellations, but the most well-known is Heracles (Hercules in Latin). He can be seen here upside-down and with his club in hand. Heracles took many male and female lovers, and had four marriages! Being the active partner in a male-male relationship was a sign of masculinity in ancient Greece and Rome, and the Greek writer Plutarch claimed that Heracles had men “beyond count” [1]. His most well-known lover was Iolau, a loyal support throughout Heracles’ life. Historically, Iolau’s tomb was known as a place where male lovers went to exchange everlasting promises, echoing wedding vows. These self-marriages are surprisingly common in history, sometimes even widely recognised, such as in medieval France, Ming China and in the Cherokee Nation, pre-European contact. Many others were secret, or known only by trusted friends, especially in the last 200 years. In 2013 the UK legalised equal marriage. This transition from a long history of unrecognised marriages and unions, to legally solemnised and protected bonds, marked an important turning point in the acceptance of LGBTQ+ people.

Curatorial note: Hercules appears twice on some celestial globes, both as his own constellation and also in Gemini. He can be seen, along with Apollo, as one of the Gemini twins in the neighbouring globe by Johannes Schöner (http://bit.do/schonerglobe). 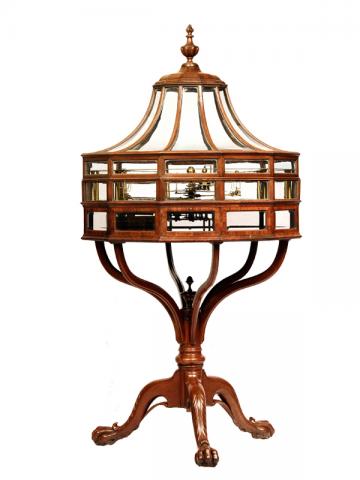 Ganymede is the largest of the four moons of Jupiter discovered by Galileo in 1610. In this grand orrery of the whole solar system Jupiter is on the left and Ganymede is the third moon from the planet. The moon is named after an ancient Trojan prince who, according to Homer, was “the loveliest born of the race of mortals, [who] the gods caught away to themselves, to be Zeus’ wine-pourer”[2].  Many sources also describe him as the lover of Zeus, king of the gods, who in Roman mythology was called Jupiter. Their relationship was a common subject of ancient Greek artworks, which have helped historians understand the custom of paiderastía — the socially acceptable form of erotic relationships between upper-class men in some ancient societies. For centuries, the language of Greco-Roman culture was used in Christian Europe to discuss sexuality ‒ this survives today, notably in terms such as ‘lesbian’ ‒ and ‘ganymede’ was used to refer to men who engaged in same-sex relationships. Even Shakespeare and his contemporary Christopher Marlowe used Ganymede to allude to homoeroticism in their works. 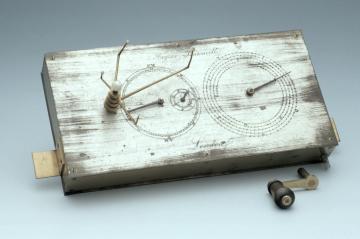 “The king of all the Gods was inflamed with love
for Ganymede of Phrygia. He had found
a shape more pleasing even than his own.” – Ovid, Metamorphoses, 1.14

Many of the planets, moons and stars are named after classical gods and goddesses. In our solar system, the largest planet is named after the king of the gods, Jupiter. Jupiter is the white ivory ball orbited in this astronomical demonstration by its four largest satellites. Third from the planet is the largest moon in the solar system Ganymede, named after Jupiter’s lover. Like most ancient Greek and Roman gods, Jupiter took both male and female lovers. He so admired the beauty of young Ganymede that he made him immortal at his side. Similarly, Ganymede, the moon of Jupiter, forever orbits its planet.

Alongside its astronomical use, Ganymede remained a popular character throughout European history, featuring in the works of Shakespeare, Michelangelo, Rubens, Goethe and many more. ‘Ganymede’ was used as a pejorative for gay men, as well as ‘catamite’, which was derived from his Latin name, Catamitus.

Out in Oxford Booklet

Out in Oxford Events

Out in Oxford App